A fast rising Airtable competitor is the open source tool Baserow. Every month they are getting closer to feature parity with Airtable. Their roadmap for 2022 roadmap looks promising. They have raised a €5 seed round to build an open source no-code toolchain. 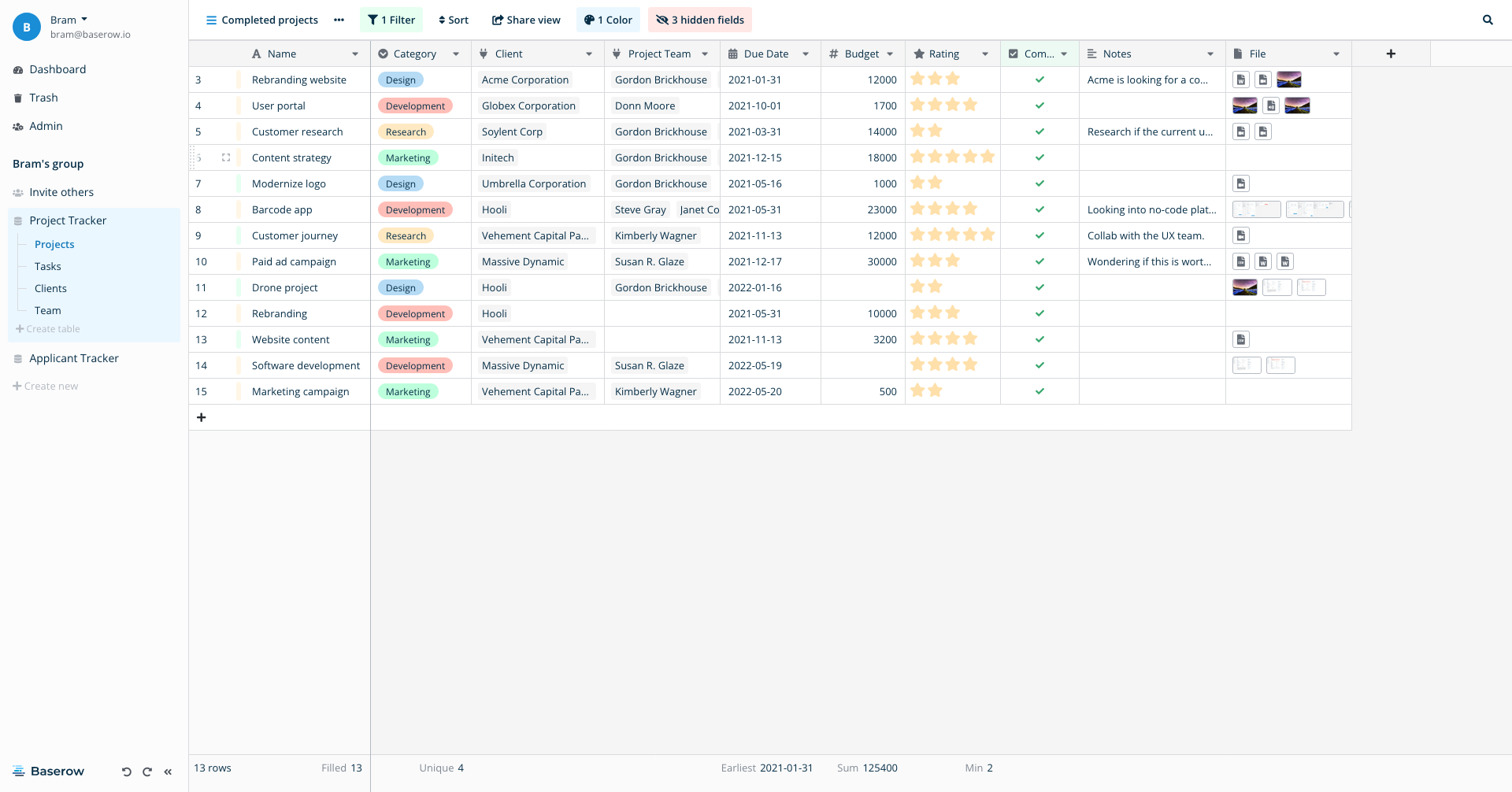 The open source alternative to Airtable

The large advantage they hold over all the other competitors is that their software is open source, or rather open core, but let’s not make it confusing. For you, this means that you can optionally install it on your own server. Goodbye vendor lock-in! In case of Baserow this also means that developers can make custom plugins and this is something that can be very useful. If you’re missing a feature with a traditional SaaS tool, you might never get it, but with an open source tool that supports custom plugins there will likely be someone who thinks the same and actually wrote that plugin. Take Wordpress as an example, there are at the time of writing 56.136 plugins on their site.

Compared to the others, their interface looks clean and is looks the most like Airtable. It offers the same flexibility and freedom. One of the advantages is the speed. You will immediately notice when you’re having lots of rows that it is still very fast. It seems that they have put a lot of effort in keeping this fast because they continuously tested with 100.000 rows per table. This probably means that their developers used a database with lots of rows while writing code.

Notion is one of the better alternatives to Airtable. It offers comparable flexibilities and it looks really good! The approach is different though. With Airtable you have a spreadsheet like interface that works really well with larger sets of data. Notion on the other hand has a text editor like approach.

A text editor alternative to Airtable

You will love the flexibility! You can create a “page” and add headings, lists, text and more, just like you would expect from a text editor. The power lies in the databases you can add. You can for example add an inline table database where you can choose the fields that fits your needs. The downside compared to Airtable is that you do not have all the features a regular database has, like linking a field to another table. Notion also does not work well with large amount of records, but again this is not where their focus lies. If you want to power of a database, spreadsheet and text editor in one tool then Notion will probably be your tool of choice.

Some other cool features are commenting which is great for collaboration with co-workers. Also the interactive elements like todo lists work like a charm. While it is not an open source tool that supports plugins, there are a lot of embeds you can add to your page, think of a Tweet, Google Maps and many more.

If you like to create simple applications by assigning actions to buttons and checkboxes then Coda is your tool. It is really cool how intelligent you can make your document. The fact that it is also possible to create database tables and embed them inside your document feels really powerful. It is like a combination of an application builder, database and text document in one tool! If you have a creative mind and know how to put this to good use, you might not need a developer after all.

The app building alternative to Airtable

When you take a first look at the interface it looks like a regular text editor, but you can do much more once you understand how it works. The tool can be learned easily because of their great on-boarding. It contains some interactive examples which actually make it easy to understand everything quickly. There is also a sidebar with learning resources.

Easily add components like tables and calendars to your page. This can be compared to the views of Airtable. It is also possible to add regular text, heading and other normal text editor components. Unfortunately it is not possible to expose your data publicly via a REST API. They do have an API available, which is clearly documented by the way, but this is only to modify your pages. Even though it is not possible to code a custom plugin, developers can still do a lot with the API. There are also apps available for Android and iOS, but there is no application for your desktop or laptop.

Today we are releasing 1.12: check out the new form survey mode, work with multiple collaborators field type, duplicate fields with data, file field support in the form view — try out all the new features in Baserow!